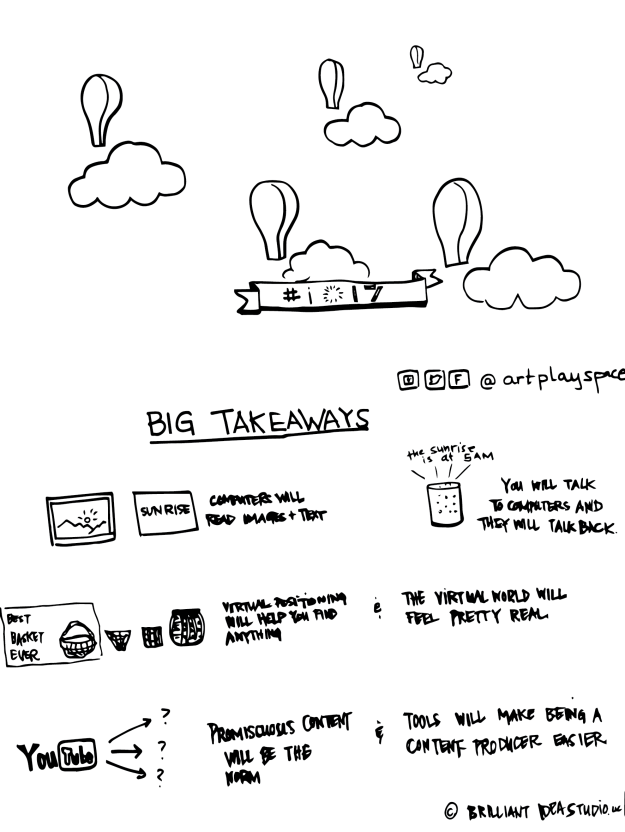 Google I/O, that glistening moment when developers galore descend up San Francisco to hear prognostications, occurred mid-May.  The keynote speech offered some insight into Google’s vision on the next decade. Admittedly, GoogleIO 2017 is an exercise in marketing synergy and willing suspension of disbelief. The keynote had the feel of equal parts TED-talk, Home Shopping Network, Dad Jokes, and Nickeleon’s “You Can’t Do that on Television”, with a soupcon of Svengali. If you look past the hokey jokes and the corporate name drops, there were some useful harbingers of our possible future.

And, why look to Google I/O for futurecasting? As Sundar Pichai said Google “Uses technical insights to solve problems at scale for deep engagement.” If you can’t image the scale of Google, think of it this way. 1.2 Billion images are uploaded to Google Photo every day. With about 35,000 museums in the nation, all of the collections in the country could be uploaded in a week or so.

Google is masterful at understanding first world problems and addressing them.  Much of the undertone for Google I/O was that they were helping cure the stress of the era (despite the fact those stresses grew from tech like Google). With the power of scale, they are poised to continue to make civilization wide changes. (Think I am being hyperbolic? Reflect on the diffusion of the phrase “Google It”.)

Overall, Google I/O was all about artificial intelligence, where machines perform actions that had originally needed human thinking. If the mobile period was about touch, AI is about sight & voice/sound. AI is becoming more human in its meaning making, particularly in its seamless understanding of visual and textual data. The change to AI will have major social changes. Think about the changes that occurred with mobile. When a new platform is introduced, peoples’ modes of interacting change until those practices become naturalized.

So, what practices will become natural for our future visitors?

This is what struck me about Google I/O.  What about you? What struck you? And, where  will that tech take our field in the future?